Everton will look to add to their tally of recent positive Premier League results when Manchester United drops by at Goodison Park on Sunday night. The Toffees enter the fray with a 6-match unbeaten run in the league, while the Red Devils will try to forget the horror of their 6-3 humiliation at the Etihad Stadium.

After picking up some good results, including wins against Liverpool and Arsenal, Erik ten Hag must have thought his team has what it takes to give Manchester City a run for their money. But the visitors succumbed to an embarrassing defeat as a rampant Erling Haaland, and Phil Foden put the record-time English champions to the sword.

Both Man City players scored a hattrick as Man City scored half a dozen past their city neighbours. After going down 4-0 in the first half, Man United salvaged some pride by scoring three back in the second half. But the final scoreline of 6-3 was still an appalling sight for the Man United faithful. 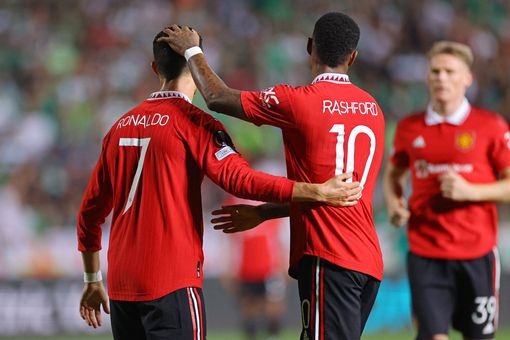 Ten Hag might regret not starting Casemiro against arguably the Premier League’s best attack. The former Ajax manager is yet to hand the Brazillian his first Premier League start after he moved from Real Madrid in the summer. And that seems unlikely against an Everton side that applies a similar tactic to Man United to get the results.

Man United have been successful in hitting their opponents on the counter, but that would be an unlikely solution to breach the Everton backline. Frank Lampard’s Everton have conceded only seven goals in the league so far, which makes them the best defensive team in the division. United would require a more aggressive attacking approach to take something home from Goodison Park.

Everton did have the last laugh when they played Manchester United last time at home. The Merseysiders were in a full-on relegation battle at that time, and the 1-0 against United proved vital to their Premier League survival. This time around, Everton are in a much better position. They sit 11th on the table, and a win against United will take them ahead of the Mancunians.

The home side have won both of their last two Premier League games and will try to inflict more misery on a freshly wounded Man United side. We believe they will sit deep and provoke Manchester United to attack. However, Everton’s lack of attacking flair doesn’t convince us that they can win on Sunday. So, our prediction for this match is a goalless draw.